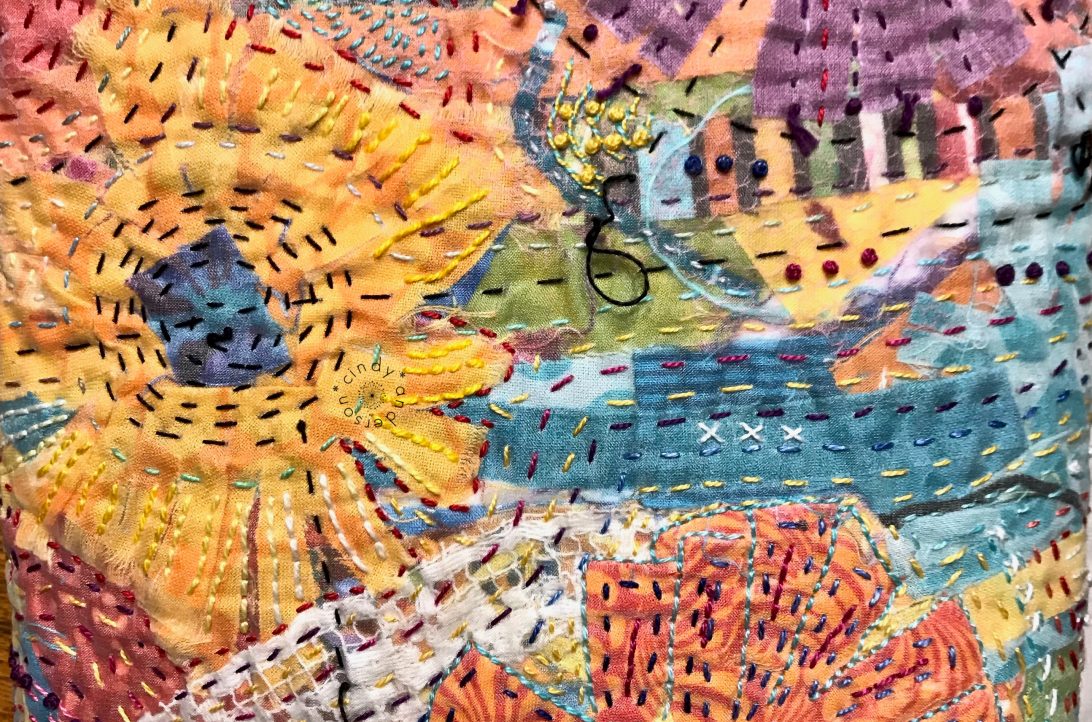 Over Due:  A Quilt

Carissa, from this is happy stuff, recently hired me to quilt one of her projects.  Perhaps you may have noticed it on my side-bar recently.  According to Carissa the quilt, known as Over Due, had been under construction during the past three years.  At our guild meeting in March she approached me about the possibility of having it quilted.  We exchanged basic information and ideas before parting company.

Am I Already Too Late?

Early in April I saw a post on her blog updating her readers with the quilt’s progress.  Her intention, to pursue my services further, was announced in that post.  Here is an excerpt from her story.

I was overjoyed to read her words.  The posting prompted the exchange of numerous emails eventually leading to a signed contract.

The quilting pattern Carissa chose was divided into two categories.  In the white or a.k.a. negative space Carissa wanted an informal square stippling.  For the colored blocks she asked me to stitch around their inside borders.  Carissa quickly sketched her interpretation of square stippling on a scrap piece of cardboard.  Before leaving her home I asked her if I could retain that cardboard as a reference.

As with any project though, there can be unanticipated questions.  You know the kind that don’t surface until you get started.  The square stippling was easy.  I quickly got into a groove and sailed right along.  After completing the first panel of white fabric I emailed a photo to Carissa for her approval.

The outlining of the blocks is where I had questions.  I sent her the following note:

. . . Do you want the stitching around the inside of each block to be a continuous row of stitching, beginning in the first block and moving on to subsequent blocks?  Or do you want me to start and stop (tie-off) in each block?

As is typical for Carissa, I soon received an illustration of her vision (oh, the wonders of modern technology). 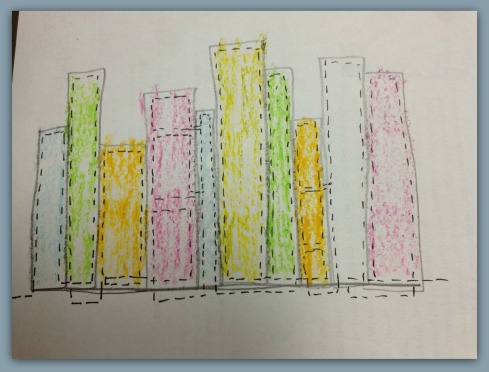 The drawing provided the exact information I needed.  There was no longer any doubt in my mind how to proceed.  Once I had that drawing in my possession I was able to finish Carissa’s quilt without hesitation.

Knowing that Carissa’s desire was to display her quilt in the MMQG quilt show I made every effort to finish the quilting as quickly as possible, without compromising quality. In less than seven hours I had her quilt finished and removed from my Tin Lizzie.  She was totally blown-away when I emailed her to announce the quilt’s completion.

I delivered the quilt to Carissa at our April MMQG regular meeting on April 24, 2013.  Setup for the quilt show was scheduled for April 30, 2013 so that left her with seven days to apply her binding and make final adjustments.  I was so thrilled to meet my deadline and so absolutely pleased with the quilt’s outcome.  It truly was a joy to work on this project.

To say that Carissa was thrilled beyond words would be an understatement.  Her out-pouring of praise was evidenced by the comments in her emails and a subsequent posting on her blog.  Here are a few excerpts:

This is what she said after seeing the first panel of white fabric quilted:

After taking the quilt home Carissa emailed me this message:

I had the goofiest grin on my face all the way home and am already plotting my next quilt for you to quilt.  🙂  Thank you, thank you for doing such an amazing job on my quilt–even my husband was impressed!  🙂

I ask all my customers how they found me and why they chose me to do their quilting.  This is how Carissa responded:

I chose you because . . . I know that you read my blog and therefore had a good sense of my taste and style, I trusted that you would probably at least quilt it better than I could on my own machine.  But those were my minimum expectations.

These were her impressions of my quilting:

The end result that you created is far, FAR better than I could have done and adds so much rich interest to this quilt top that I already loved and made it SO much more interesting and beautiful.

Truly, I feel giddy every time I see it!

Her final words of affirmation were announced to her readers in this way:

Well there you have it!  I would say this is one VERY happy customer.

I’ve chosen to link my post with Freshly Pieced’s Work In Progress Wednesday.  There are many other readers that do as well.  You may view their projects by following the link below.

Have a wonderful day and thanks for stopping by!