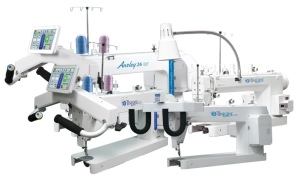 A Test of My Patience

My long arm quilt machine recently decided to test my patience. It was 3:15 a.m. I’d been up quilting for an hour and forty-five minutes when the needle, with its point embedded in fabric, suddenly stopped. Having a needle stuck in fabric is enough to make me panic. Somehow I had to find a way to solve this problem.

My first instinct was to manually raise the needle. No matter how hard I tried I couldn’t get the needle to budge. My next thought was to enlist the assistance of my spouse. I figured he could probably help but the only problem with that idea was that it was way too early in the morning to bother him. So I decided to throw in the towel, at least for now, and wait until morning.

At first light I explained to my spouse what had happened. Between the two of us we were able to do a little research on the Internet by typing in the error message displayed on the machine’s screen. The message read:

We were so thrilled when several web links appeared. At the very top was a link to the TinLizzie website. The link was titled, “What to do when the machine jams!”/TinLizzie 18 . The link provided detailed instructions on how to clear the jam. We followed their suggestions very carefully. Unfortunately we still were not able to fix the problem.

Frustrated with the lack of success we decided to look more closely at the instructions. Just maybe we had missed a crucial step. At the bottom of the screen, in the comments section, we found a link to a video. The video walked us through the process of clearing a jam one step at a time.

From the video we learned two things

The first was the need to remove the protective cover from the flywheel belt. By removing the cover we could gain better access. The second tip was to turn the flywheel clockwise. Using this new information we tried again to clear the jam. After several attempts the wheel finally let loose. Dislodged was a small wad of lint. I was sort of surprised to see it because I’m very careful to keep the bobbin area clear.

Time to Try it Out

After reinstalling the belt cover I removed the dislodged lint as well as any other stray threads. I also replaced the needle. After replacing the needle I turned on the machine and tested it to make sure we were successful. Thankfully all went well. I was back in business thanks to the TinLizzie website and the assistance of my spouse. Time to get back to quilting.

Cindy Anderson of In A Stitch Quilting