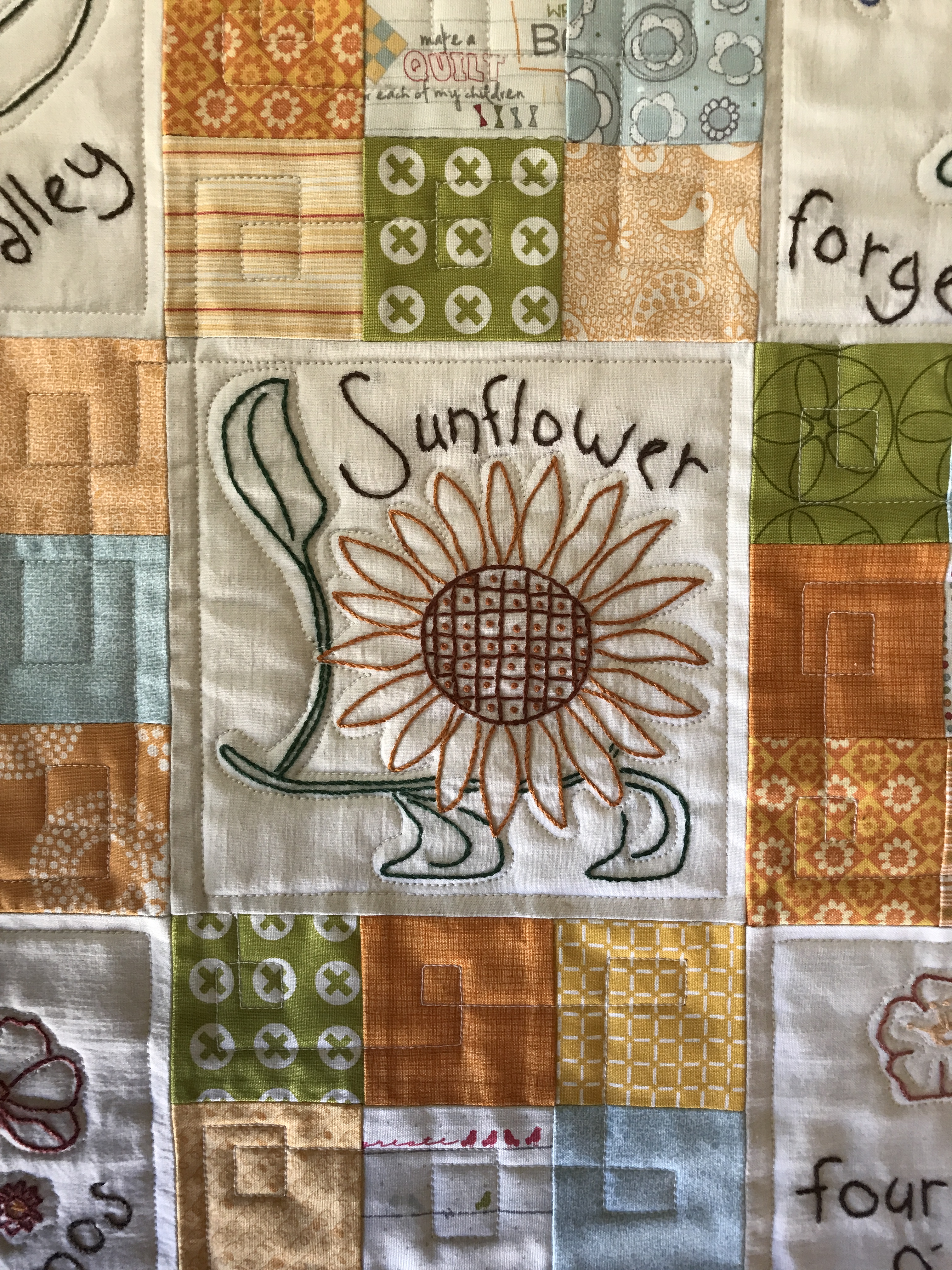 Pam’s Nine Patch Garden is one of the quilts I inherited from my Mom. I first introduced my readers to this quilt eons ago. Way back in March of 2017 I had the pleasure of spending a number of days at the Woodland Ridge Retreat Center in Menomonie, Wisconsin. While there, aside from many excursions, my attention was focused on five quilts passed on to me by my Mom. All of them were in various stages of completion. If you would like to read about my adventures at the Center you will find them here. My original story about this quilt can be found here.

This quilt is extra special to me for two reasons. First, my Mom is a big fan of flowers. My Mom is well-known for turning the majority of her lawn into garden space. Those gardens were always overflowing with flowers. Her love for gardening and for flowers was passed on to me.

The second reason is because my Mother is also an avid cross-stitcher as well as a seasoned embroiderer. This quilt has twelve blocks that have been hand embroidered by my Mom. All of them are of various flowers, many of which she has grown in her own gardens. Her love for flowers along with her talent for stitchery are why this quilt is dear to my heart.

When I received the quilt, in it’s plastic package, the twelve embroidered blocks were all that were finished. Not yet assembled were the twelve nine-patch blocks. Included with these items were several lengths of multiple fabrics. Whether or not they were meant to be used for the 12 remaining blocks was unclear. My Mom’s recollections on the status of her quilts is sketchy.

Since I wasn’t really fond of the enclosed fabrics I decided to go out on my own to select options I felt seemed more appropriate. I pulled specimen after specimen from my fabric stash to audition as candidates. By the time I had finished I had accumulated enough fabric to complete all twelve blocks with fabric to spare.

I chose a variety of fabrics from the green, yellow, orange, white and blue families. The fabrics were adorned with flowers, birds as well as catchy phrases that seemed to match well with the quilt’s theme. Among the phrases or words of encouragement were:

One even has a mini bucket list printed on it.

With my fabric choices conquered it was time to create the nine-patch blocks. Typically I would assemble strip sets to create them. In this case I wanted to be more strategic in the arrangement of these fabrics. I wanted to make certain I had a well-rounded distribution of color as well as printed phrases. To facilitate this outcome I individually cut squares and hand placed them in groupings of nine. Once I was satisfied I stitched them together.

The embroidered blocks and the nine-patch blocks were then laid out on a table and juggled around until I was satisfied with the appearance. They too were then stitched together into rows and finally into one piece.

To the 24 blocks I added first a small border of hand-dyed orange fabric. Next I added an over-dyed border of blue. With the last border in place it was time to load the quilt onto my longarm machine for quilting.

Since it is obviously impossible to pack up and take my machine along on trips, I think my husband would shoot me if I asked him to do that, the quilting had to wait until a later date.

Fast-forward to December of 2017. This was the first opportunity I had to even contemplate accomplishing this task. I chose a pretty floral batik from my inventory to serve as the quilt’s backing. After loading my carefully pressed top, batting and the batik on my machine I set to work adding a variety of stitches.

In the outermost border I stitched a swirly pattern using a color coordinated thread. The bright orange border was treated with a soft flowing line of cream colored stitches. In the nine-patch blocks I stitched a meander of angular lines. To polish off the remaining blocks I first added a row of stitching around the outer border. Next I echoed around each of the flowers giving them a dimensional appearance with the same cream colored thread.

Curious what the stitching looks like from the back?

This last photo was included for three reasons:

Combined together I believe all of my added touches created a magnificent quilt; one with which my Mom would be well pleased. I did have the chance to show it to her early in December of 2017. She was overjoyed to see the quilt and extremely thrilled with its outcome. I asked if she remembered doing the embroidery and she did.

I set myself a goal to finish all five of my Mom’s quilts before she is no longer with us. She’s getting on in years so I know the timeframe I have to work with is limited. Finishing this one meant I was one step closer to reaching my goal.

I am very happy to say that the other four, one of which was The American Flag Picnic Throw, have been completed as well. I will share their stories in the coming weeks.

This wraps up the story of my Mom’s Nine-Patch quilt. I hope that you have enjoyed reading about its history as much as I have enjoyed sharing it. They say that behind every quilt is a story. This quilt is certainly no exception.

Thank you for spending time with me as I revealed this story. I’m so glad we had the opportunity! Be watching for the quilt number three of five.