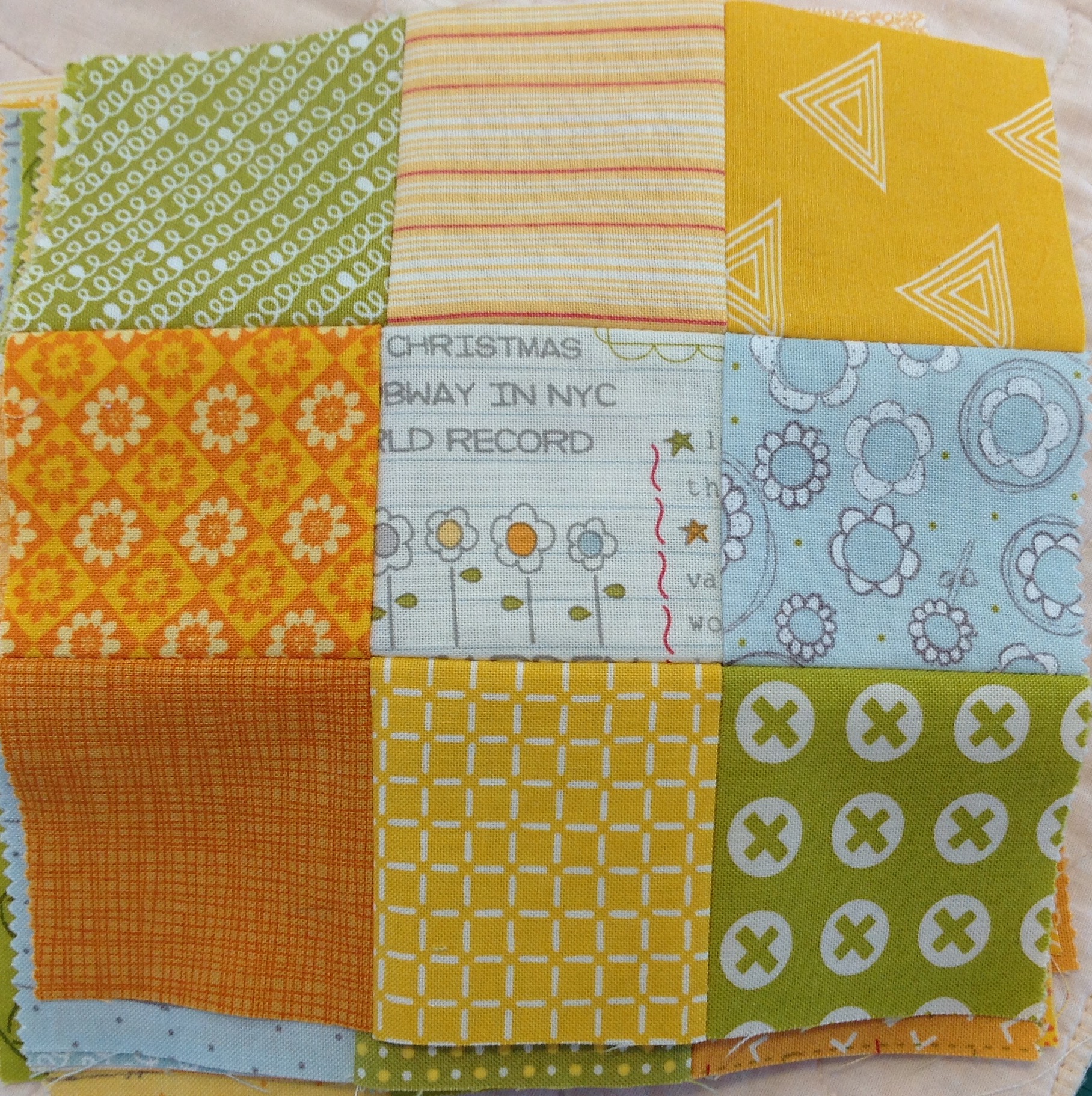 After arriving yesterday, unpacking and taking a break for supper, I sat down at my sewing machine and got the ball rolling. As you may remember my plans for the retreat were to, one by one, conquer my Mom’s unfinished quilts. At the top of the pile was this one.

I chose this one first because I absolutely love flowers and embroidery. If I had saved it until the end it would have been like saving the best to last. I, however, wanted to eat my dessert first. So first it was.

The hardest part about working on someone else’s quilt is figuring out where they left off. From what I could gather the only part my Mom had finished was the hand stitching of the flowers. That’s not to say that what she had finished was in any way less important than the rest of the pattern.

The next logical step was to remove the blue ink that had been the template for her stitching. I did that rinsing them in lukewarm water until the ink had disappeared. Each block was then placed on a towel to dry. Once they were dry I set them aside for their trip to the retreat.

Before heading to the retreat I had to decide if I was going to use the fabrics my Mom had purchased for the nine patch blocks or choose something else. The decision wasn’t really all that hard because I really didn’t like what she had chosen. So I set out to put my own spin on fabric colors.

I dug out my pre-cut fabric strips to audition specimens. Spread all over my kitchen counter were numerous piles of fabrics. Each one was carefully chosen to compliment the colors of thread used in the flower blocks. Once I was satisfied with my selections I carefully packaged them in my traveling case.

Fast forward to the retreat: when I packed up my supplies I assumed I was being extra cautious and wouldn’t forget anything. Unfortunately I was disappointed when I realized I wasn’t as careful as I had thought. From the tubs I was able to retrieve the hand stitched flower blocks, their accompanying patterns, the instructions for the outer borders as well as my hand chosen strips of fabric. What I didn’t find were the directions for the nine patch blocks or the dimensions for trimming the hand stitched flower blocks. Drats! Time to improvise.

After measuring the hand stitched flower blocks I decided they needed to be trimmed to 6 1/2″ square. I also figured out how I was going to cut and assemble the nine patch blocks. Once the brainstorming was complete it was off to the races.

Here’s the pile of nine patch blocks waiting to be sewn in rows.

A photo of the blocks ready to be stitched into rows and eventually the quilt top.

Finally a not so great photo of the finished quilt top with two added borders.

While it’s not to easy to see the picture hanging alongside the quilt (I promise the photos of the quilt, once the longarm quilting and binding are done, will be much better) I think you can still see the difference between the pattern and my version.

The owner of the retreat center, Chris Daly, has a mini store where she sells her hand dyed fabrics, among other things. I shopped her store looking for fabrics that might compliment my quilt top. Fortunately I found two colors that matched my color scheme quite nicely. The orange was one that Chris had dyed and the blue is from Turtle Hand fabrics.

That’s a wrap for today. Daylight has come and gone and all of my sewing buddies have gone to bed. I guess I should probably do the same.

My Mom is getting on in years. For some time now she has been methodically sorting through her sewing studio removing anything and everything she no longer cares to maintain or finish. Each time I visit her she has piles of collectibles, crafts, and magazines waiting for me to browse.

After hauling home several boxes of items my spouse expressed his wish that I no longer bring things home. Before receiving that moratorium I brought with me two baskets containing the beginnings of five different quilts. All were in varying degrees of completion. Among the projects I found.

Because the quilts were purchased and started by my Mother I feel the need to see them through to completion. Be watching for updates as I tackle each item.

Cindy Anderson of In A Stitch Quilting